When I think of Charleston, SC, several things come to mind:

I’ve wanted to visit Charleston for quite awhile and I’m happy to say that it has everything I envisioned and more.

In case you’ve been thinking about visiting, I want to share some information and my experiences with you.

In recent years, Charleston has received numerous awards and accolades from well-respected travel publications, making it one of the most popular travel destinations in the U.S.

Charleston has been voted:

I’ve only heard good things about Charleston from anyone who’s been there.  After visiting it myself, I can see why it is so beloved.  It offers much more than Southern charm.

Charleston has been around a LONG time.  It’s history dates back more than 300 years.  According to Wikipedia,

Founded in 1670 as Charles Town in honor of King Charles II of England, Charleston adopted its present name in 1783.  It moved to its present location on Oyster Point in 1680 from a location on the west bank of the Ashley River known as Albemarle Point.  By 1690, Charles Town was the fifth-largest city in North America, and it remained among the 10 largest cities in the United States through the 1840 census.

With a 2010 census population of 120,083 (and a 2014 estimate of 130,113), current trends put Charleston as the fastest-growing municipality in South Carolina.  The population of the Charleston metropolitan area, comprising Berkeley, Charleston, and Dorchester Counties, was counted by the 2014 estimate at 727,689 – the third-largest in the state – and the 78th-largest metropolitan statistical area in the United States.

Charleston’s history is evident, primarily in the downtown area, where the architecture of the homes, churches and other buildings reflects the time in which they were built.

I explored Charleston for two days.  Here’s what I did during my visit.

After stopping at the Mount Pleasant Visitor’s Center (across the bridge from Charleston) and getting some insight and information from Nicole, the VERY patient young lady there, I drove across the famous cable-stayed bridge into historic Charleston.

First impression: I loved it!  I couldn’t believe I was finally here!

My next order of business: find somewhere to park.  There are several parking options in Charleston:

After opting for a parking garage on Cumberland Street (between Church and Meeting across from The Powder Magazine and near the heart of the downtown), I parked the car, stashed my valuables out of sight, and headed off.

I like to wander around, stop to take pictures and basically go with the flow, so I opted for a self-guided tour. However, Charleston offers many other tour options including tours by horse-drawn carriages, pedicabs, walking tours, and at night – ghost tours.

One of the first things I saw when I exited the parking garage was the soaring steeple of St. Phillip’s Episcopal Church above the trees.  I headed towards Church Street to get a closer look.

According to the plaquard outside, St. Phillip’s was established  in 1680, just 10 years after Charleston was founded. I was excited to see the interior of the church, but unfortunately, it was locked so I settled on taking some photos of the exterior and the surrounding area, then headed south down Church Street. 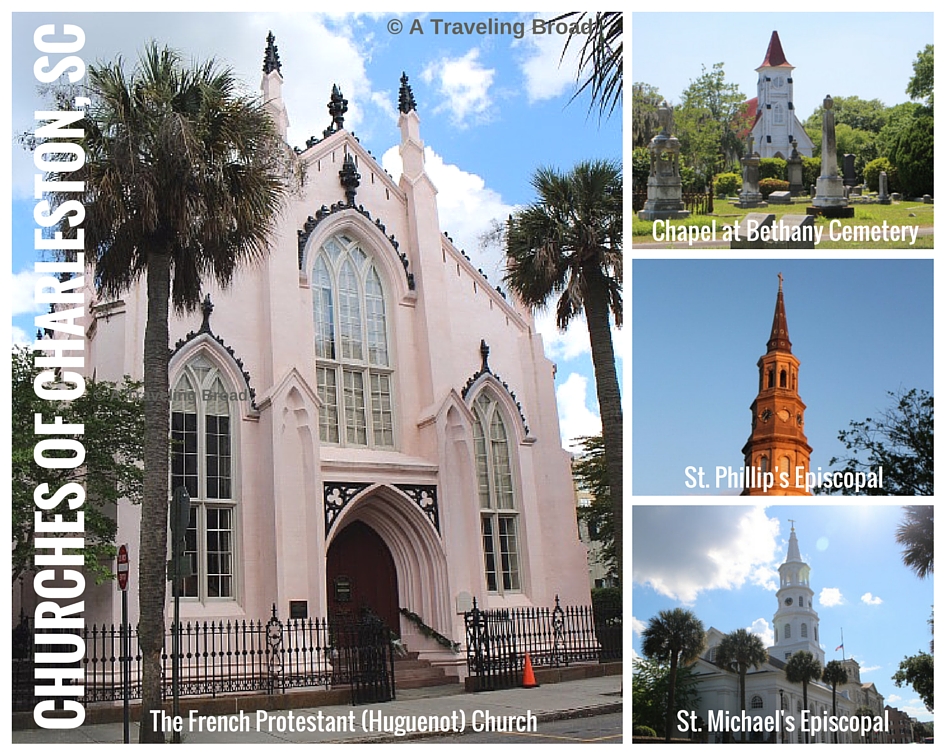 About a block away, I came upon the unique and beautiful French Protestant (Huguenot) Church.  It’s architecture was unique, very different from the more traditional churches in Charleston.

Churches fascinate me.  I enjoy the stained glass windows, the decor, and especially the architecture.  The pictures to the left  (and ad the end of this post) show just a few of the many beautiful churches in Charleston.

I got to the corner of Church and Broad Street and saw the white steeple of another church to the right, St. Michael’s Episcopal Church, so I headed that way.  On my way, I discovered Washington Square Park and took a detour to check it out. There are a lot of small parks like this throughout Charleston.

After walking around the park, I proceeded down Broad Street.  I found another historic site, City Hall, across the street from St. Michael’s Episcopal Church.

I turned left on Meeting Street and followed it to the end where it intersects with South Street.  Along the way, I saw gorgeous houses of varying architectural styles such as the aforementioned antebellum (“occurring or existing before a particular war, especially the American Civil War”) homes , many featuring serene private gardens full of flowers, plants, and sometimes even fountains.

One of the things I noticed while exploring was the amazing floral aromas throughout Charleston.  I saw flowers in planter boxes hanging from windows and fences, as well as in public and private gardens.  Their delicious scents enhanced the already lovely surroundings and frequently made me stop, close my eyes, and bask in their delightful scents. 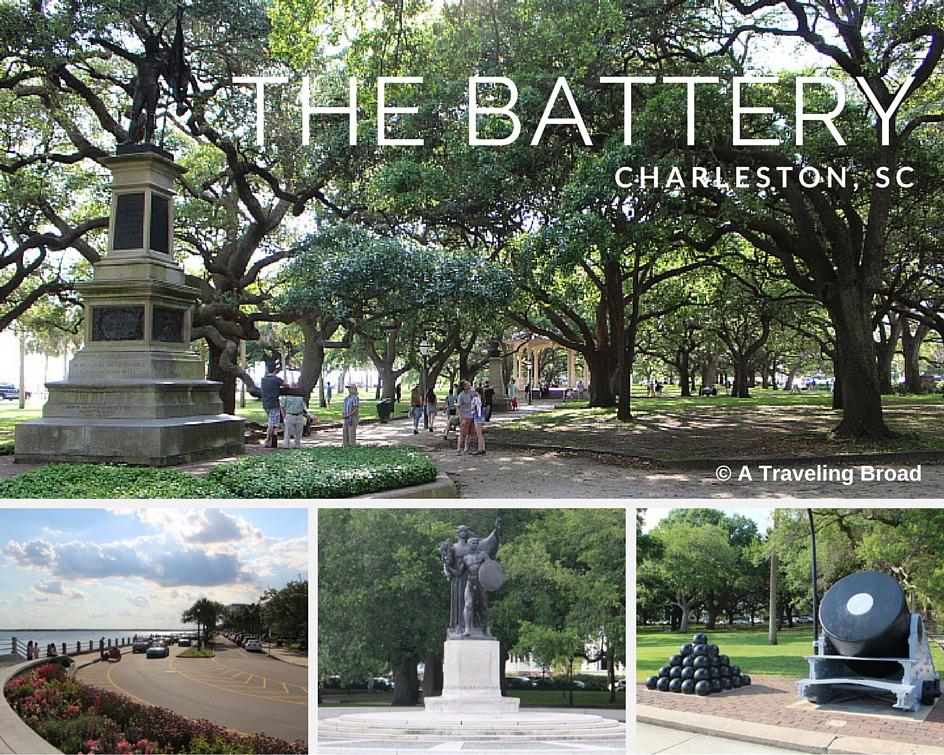 With the harbor to my right, I walked along the sidewalk up East Battery.  On the left, impressive antebellum and other styles of homes in a variety of colors lined the street.

When I got to East Battery and Tradd Street, I saw the famous Rainbow Row, a block of row houses painted in different pastel colors.  As I continued up East Battery, I noticed people heading down the streets to my right but I wasn’t sure what they were walking towards.  A couple out walking their dog told me there was a really nice park at the end of the street, a very popular spot among locals and visitors alike, and that I should check it out for myself.

I took their advice and made a right down Vendue in the direction I saw the others heading.  At the end, I came upon the beautiful Waterfront Park, a sprawling flat eight-acre expanse.  To my right was a sidewalk lined on both sides by plantation trees typical of the South; in front of me was a fountain with young kids darting in and out of the arcs of water, smiling and screeching with joy.  Beyond the tree-lined sidewalk, the park opened up to a lawn area where visitors could relax and read a book, have a picnic, get a tan, or people watch.  From the park, Pinkney Castle and Fort Sumter were visible in the distance to the right and the Arthur Ravenel Jr. Bridge and the replica of the S.S. Yorktown were visible to the left. 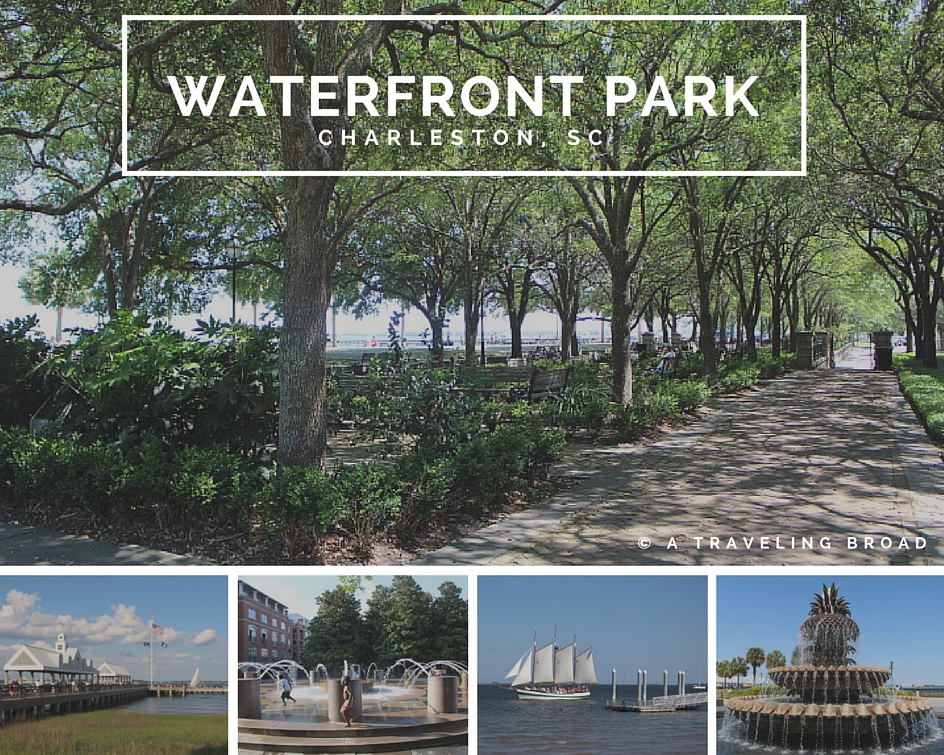 Waterfront Park also features a pier where visitors can get a better view of the harbor or relax on a bench or on one of the swings underneath the pavilion and watch the sailboats go by.

After walking around for several hours, I had worked up an appetite.  Armed with the names of several recommended restaurants, I went in search of a place to eat dinner.  The first two places I tried were very busy and required a wait.  I was really hungry by this point, so I kept searching.

On Market Street, I came upon Lowcountry Bistro.  After checking out the menu posted just outside the front door and finding that they serve typical Southern food, I went inside.  After all, “When in Rome…” (or in my case, Charleston).

The hostess seated me right away (yay!) and escorted me to a table on the balcony outside.  The service I received from my waiter, Kevin, was good, the food was tasty, and the wine refreshing.  In the courtyard down to my right, two men were placing instruments and singing.  “Wow,” I thought. “How great!  Dinner AND a show!” 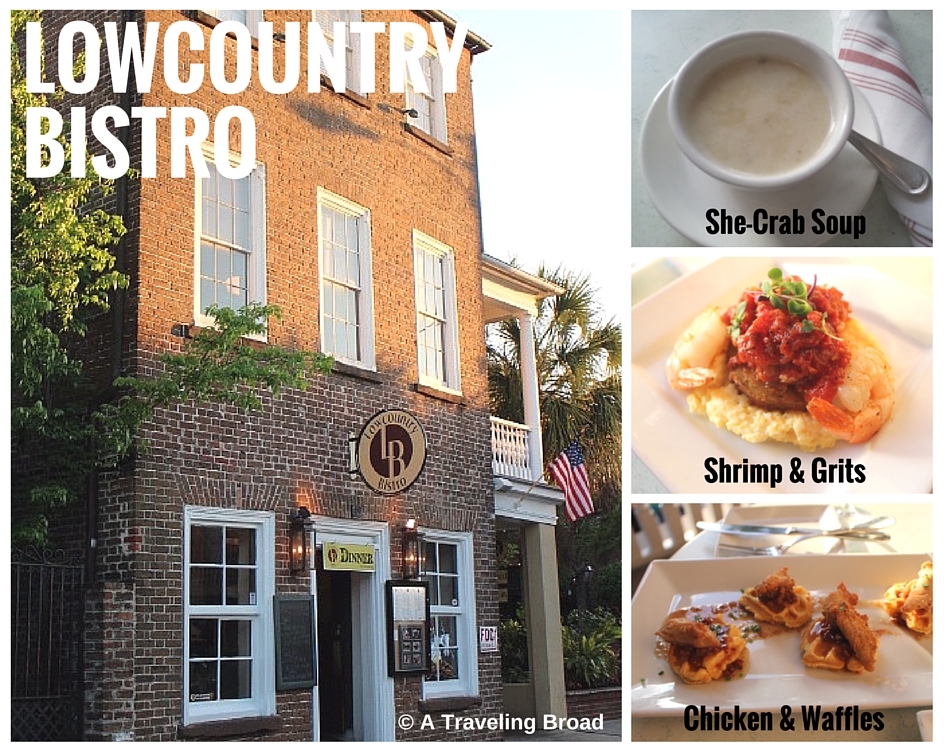 After dinner, I was ready to call it a day and headed up Market Street toward the parking garage on Cumberland & Church Streets through the indoor market buildings in the middle of the street.  Outside one of the buildings, a young woman played guitar and sang, her guitar case open on the ground, encouraging tips.

It has been a great day.  I headed to North Charleston to stay at my first Airbnb.

On the second day of my visit, I headed back into downtown Charleston from a different route since I was coming from North Charleston.  I drove down King Street to see what the famous shopping district had to offer.  Stores ranging from Forever 21 to Louis Vuitton lined the street.  I’m not very interested in shopping, but for those who are, Charleston’s King Street Shopping District is a must!

I parked in a garage closer to Waterfront Park and headed to Fleet Landing for lunch.  Getting seated was not an issue.  I was able to get a table right on the deck overlooking the harbor.  Waterfront dining – my favorite! 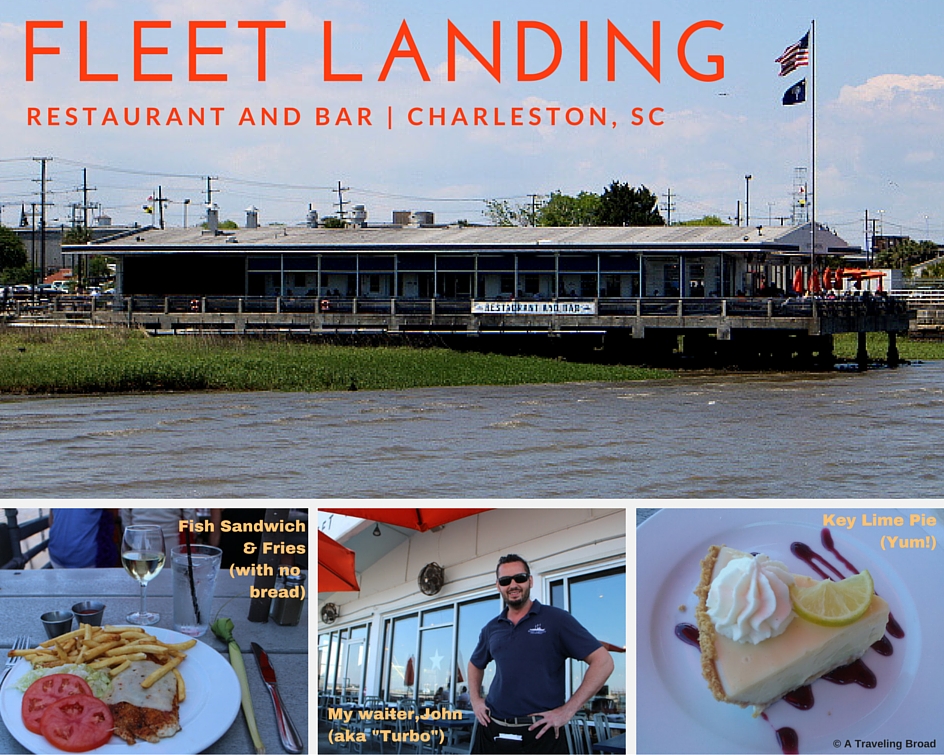 Before my meal, I met a group of 6 ladies celebrating the 50th birthday of one woman in the group. During the meal, I met a nice couple from Charlotte, NC sitting at the next table.  They were leaving on a cruise to The Bahamas the next day (there’s a cruise ship terminal right on Charleston Harbor – who knew?!)

I also enjoyed saw sailboats, a Schooner, and some dolphins.  My meal and the service were good and the view from the deck was pretty; all in all, a great experience.

Wanting to do something else before I left Charleston, I asked Turbo for some suggestions about where to go or what to see.  He said he enjoys walking around the College of Charleston campus.  I took his advice but instead of walking to it (it was a bit of a distance from the harbor and I had a VERY full belly), I decided to drive. 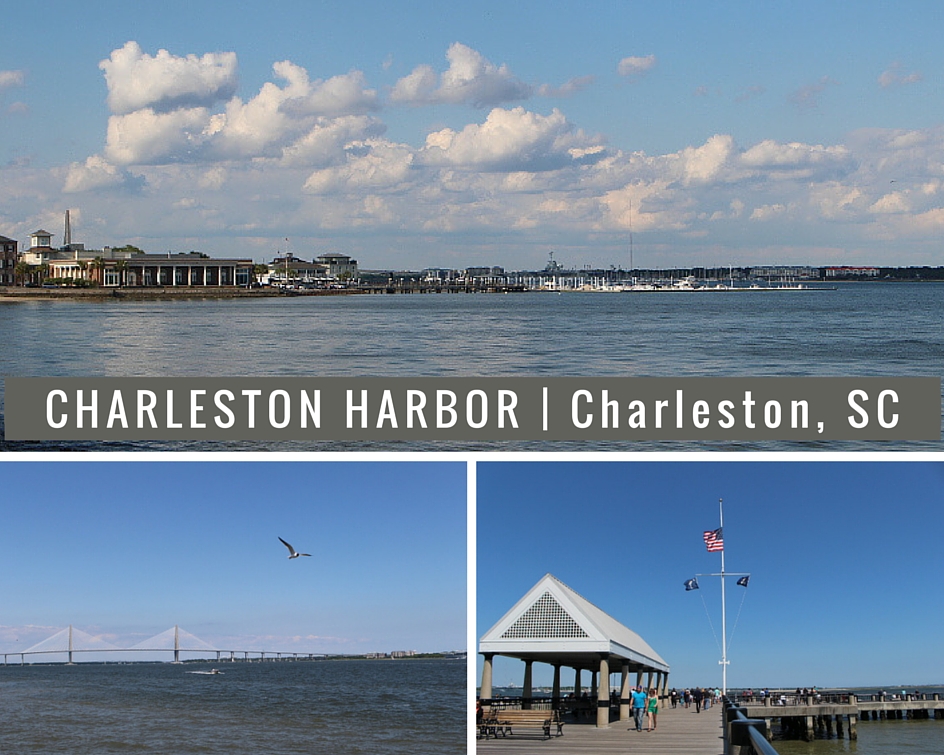 On my way to the campus area, I drove around the neighborhood near The Battery where I’d walked the previous day.  The streets in this area are quieter than the more touristy areas around Market Street, perfect for a leisurely bike ride.

I drove to the area around the campus and found it was just as Turbo had described – really beautiful and worth a look around.

After seeing the campus, I drove around the streets on the perimeter of the campus, stopping periodically to take pictures.

Right before I left Charleston for good, I stopped at the stunning Grace Church Cathedral, a church I discovered near the campus, to take some photos. I was pleasantly surprised that the church was open as a service had just ended.  Once inside, I was floored.  The church is stunning. Completely stunning! 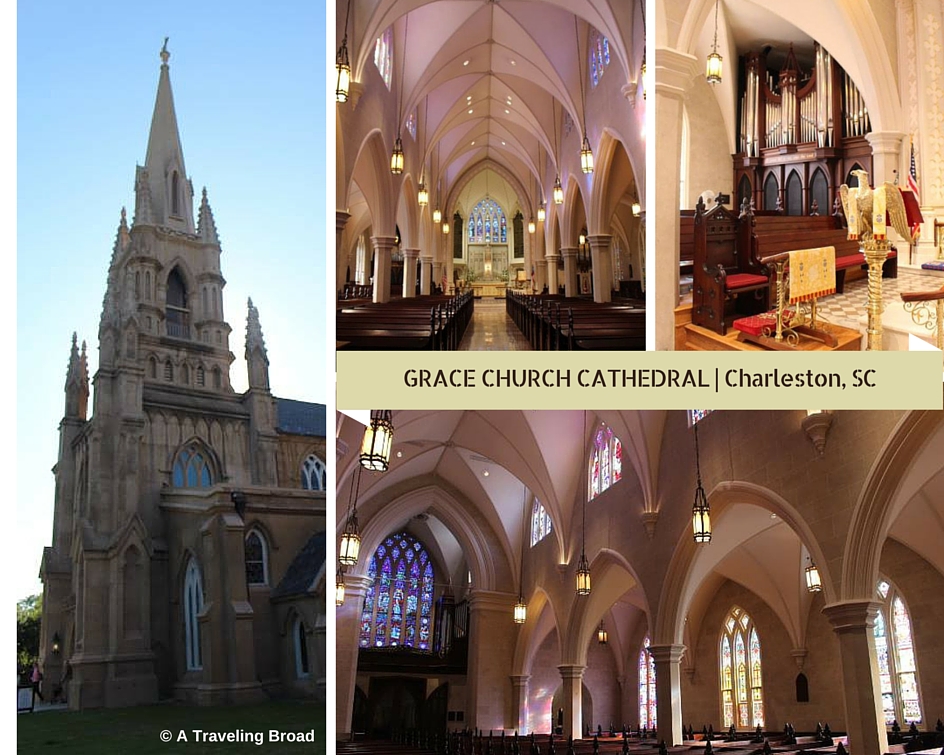 My visit to Charleston was really fun and I’m glad I was finally able to check it off my bucket list.  However, there’s still a lot of stuff I didn’t get a chance to do, so I’m sure another visit is on the horizon!

Charleston, SC – What To Know Before You Go:

I hope this post helps you get a feel for Charleston and perhaps makes you want to see it for yourself.

Have YOU been to Charleston?  What did you think? What were your favorite things about it? Share with us in the comments below.